I've rearranged my blog lists in the right hand column below the tags. I've found several cyberfriends with Addison's blogs and I've grouped them together. Although our blogs are very different with different focuses, we all have two things in common, Addison's and a great attitude! I encourage you to check out these great blogs (listed in no particular order) written by people with Addison's disease.   Please check out these awesome blogs!  They are all full of inspiration.


Never a Dull Moment - a US woman who takes amazing pictures

When the music's over, turn out the lights! - a very talented musican and song writer (among other things) with Addison's who's from New Jersey

Running Buddha - an ultrarunning Addisonian guy from the US

CaringBridge.org - krystal - a young woman who struggles with Addison's and other comorbid conditions

Approach to the patient with newly diagnosed adrenal insufficiency
Posted by Thomas Repas, DO, FACP, FACE, CDE  April 27, 2009 10:45 AM

The above article was posted by Dr. Repas who is also a runner (which has nothing to do with the article).  The gal that was diagnosed was fortunate to be seen by someone who did not dismiss her symptoms as depression or psychosomatic.

Dr. Repas also has a blog where he talks about ultrarunning.  We are doing the same race in June and I hope to meet him there.  An Ultra'thoner's Blog Thoughts and reflections on trail and ultrarunning from the "back of the pack

I'm curious, how many of you were treated for depression despite Addison's symptoms? 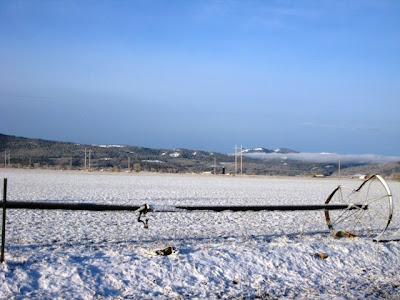 Happy May Day from Teton Valley, Idaho
May 1, 2009
I don't know the key to success, but the key to failure is trying to please everybody. -Bill Cosby
This is such a bad time of year here in the Tetons.  Everyone else is talking about sun and heat and the approaching summer.  We've got rain and snow and cold temperatures, lots of mud and the trees still look dead.
Picked last in gym class reflects my general attitude.
I think this has been the worst spring for me out of the last 14.  You'd think I'd get used to it, NOT!  I wish things were different and I could get out of here for the months of April and May but that's not an option until Zane graduates from high school in 2012.  Any hoo, until 2012, I've got to find a way to make the winter/spring? bearable.
The kidney infection has gone away completely and physically I feel fine.  I'm still running and have a race on May 23rd in Pocatello, Idaho.  I'm still volunteering at various places and I'm working as much as I want to.  Mostly I'm waiting and hoping for some sunshine and temperatures that reach the 60s.

Pictures from April and early May in no particular order. 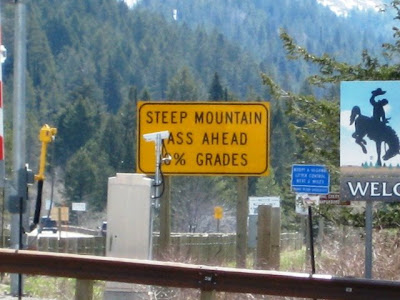 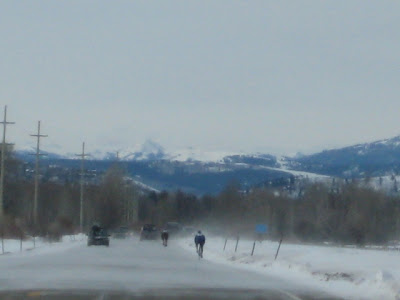 I helped Trevor at the Pole, Pedal, Paddle race in Jackson, Wyoming.  Screwed up helping him.  That's snow blowing across the road and those folks are riding 20 miles!  April 2009 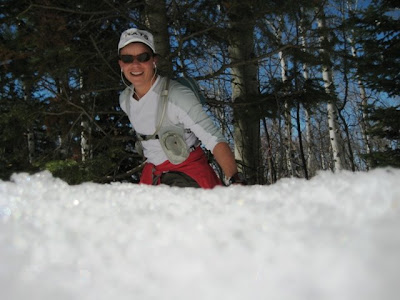 Me in a tree well.  The snow was still waist deep.  I'm getting good at taking pictures of myself since I'm mostly running alone.  Aspen Trail April 2009. 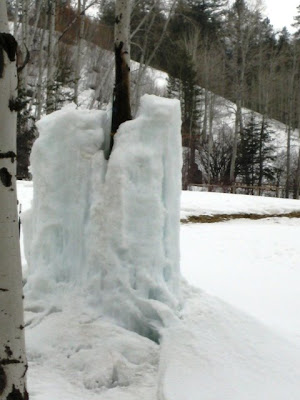 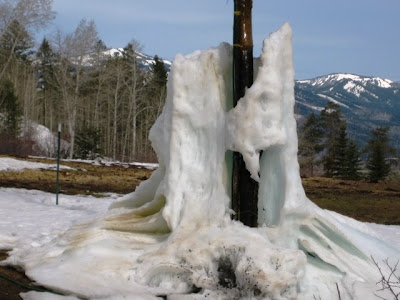 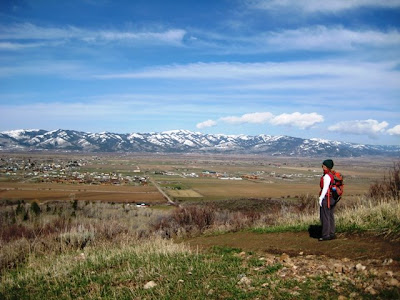 Mud Lake with Colleen!  It was great to have company.  The view of Victor, Idaho from almost 1,000 feet up. 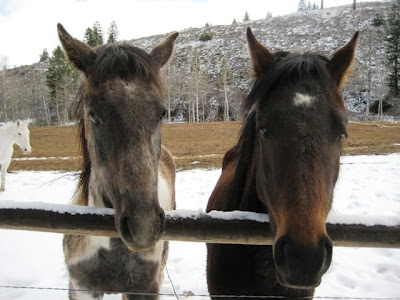 Such friendly horses.  Cisco and Jack want to be fed. 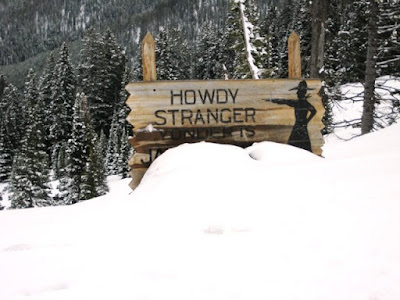 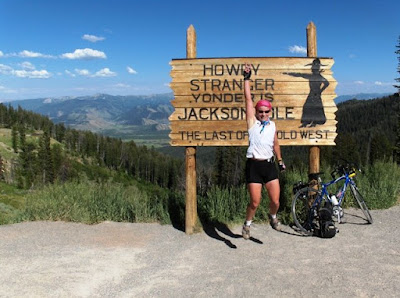 Top of Teton Pass again.  Can you see the cars parked against the snow bank?  That's some deep snow.

Turkeys at the ranch where I work.  They are funny birds.