Things are only impossible until they're not.

On going chronicle of injury

A whole new world, parking in a reserved spot as close to the front door as possible 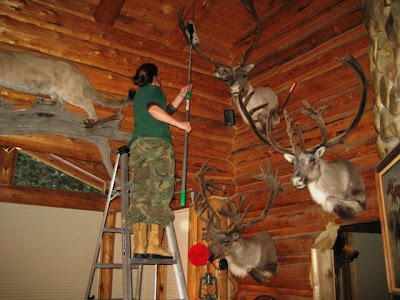 Loaded with Ibuprofen, unknowingly broken and working a couple of weeks ago

So, yesterday's post was truncated by AT&T. It's probably best that I didn't post my hysteria for the world to read.

Here's what happened. I had a one hour drive to Jackson, Wyoming's St. John's hospital. During this ride, I discovered that driving that long of a distance with a femoral neck fracture is uncomfortable. I got to the hospital at 8 am as scheduled. Talked to the radiologist tech and radiologist. They decided the nuclear bone scan (relief!!) was unnecessary after some back and forth among several people, most importantly the radiologist at the hospital and my orthopedic doc (who has not seen me yet but knows what's going on). Very importantly as well, the orthopedic doc called me and explained everything. My MRI was accessed by the radiologist in Jackson and it was confirmed, I have a classic compression stress fracture of the neck of the femur. He immediately told me NOT TO PUT WEIGHT ON MY LEG, AT ALL, FOR ANY REASON.

Mentally, after receiving the confirmation of the diagnosis, I went into a little bit of a tail spin. Pretty much everything I do involves moving around and doing, work, hobbies, . What's a girl to do when she gets bummed? Go shopping! Bought a nice light backpack to haul things around, spray paint for my ugly crutches and some beauty supplies (if I don't feel too well, I might as well try to look a little better). 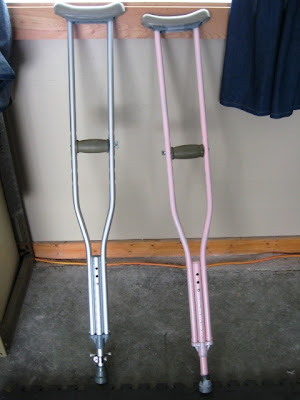 Crutches before on left after on right!! Yahoo!

I'm exhausted. My eyes look like someone has punched me. It's hard to rest so much. It's hard to do not much. It's super hard to wobble around on crutches, especially on ice. My upper body is sore! Luckily this crutch thing makes it hard for me to go to the kitchen and eat, it's a lot of trouble and effort for some food. It will definitely keep me from eating too much and getting fat.

Tomorrow is my appointment with Dr. Brown the ortho. I am waiting until I talk to him before I make any plans or set any goals. I read that even water running with a flotation device is prohibited because the muscles pull on the fracture. I would guess that spinning on a bike with no tension is out too. We'll see! I have no idea what I can expect out of the next month.

Thanks for all of the well wishes and kind words. I really appreciate it, eventually, I will respond to emails and FB comments. I've got a lot of time to kill.

I'm in medical limbo. I haven't missed this part of getting diagnosed and treated. I'm thinking I will c

Stuff is going on

Sometimes I've believed as many as six impossible things before breakfast.

Here's a rather boring report about what's going on with me. As usual, bold used so you can skip some or all of this!

That limping I was doing, the use of the elevator, the sitting to get my pants and shoes on, all legitimate. I've got a stress fracture of the femoral neck. I'm on strict orders to use crutches and keep weight off the right hip at the very least until I see the orthopedic doc. It hurts a lot less now that I'm not walking on it.

What did I do to cause this? No one knows but here's my theory...My bone density is excellent, running training was quite reasonable. I think it was a combination of factors, not enough cross training, wearing Crocs to run in when my heel hurt, and basic hormonal problems (Addison's, hypothyroid, low free T3, lowish estrogen). In addition, I kicked the hell out of a couple of things after the aching started and that probably put me over the edge. I also tried to ignore the pain for a couple of weeks before seeking treatment. I suspect many of you feel as I do, I feel like a hypochondriac every time I go into the doctor's office or mention a pain at home. I try to avoid going to the doctor's office unless I'm in a lot of pain or really sick.

What now? I'm on crutches and trying to learn how to carry crap around at the same time. I need to keep weight off the leg. Nuclear bone scan today or tomorrow and an appointment with an orthopedic doc Saturday.

Excellent small town medical treatment! Right from the start, I was treated very well by our local medical staff. I was able to get appointments immediately when I requested them.

I'm incredibly pleased that within hours of my MRI, I knew what the basic problem was, had an idea of what I could and couldn't do and had a follow up appointment set.