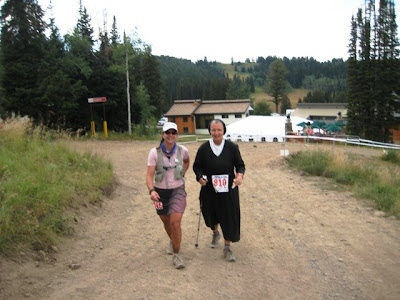 Sr. Mary Beth is an amazing woman who has done amazing things.  She ran the Grand Teton Races 50 last summer, her first 50 and did a moving presentation.  I, a nortorious cheapskate, was so moved that I donated to her cause (not trying to drum up donations, just making a point that she got me to donate with her presentation!).  Sister Mary Beth should be an inspriation to us all!

KEY LARGO -- Sister Mary Elizabeth Lloyd is asking people to pray for her this weekend: She's running the entire Florida Keys island chain -- 100 miles over 43 bridges -- in her calf-length black habit.
''I'm like Johnny Cash,'' she said. 'I wear black to draw attention. And when people ask me: `Why in God's name are you doing this?' I can say, 'For the orphaned children.' ''
Sister Mary Beth will be one of about 65 people running the entire grueling distance, from Key Largo to Key West, in the second annual KEYS100 race that begins Saturday morning and has a 32-hour time limit. Another 275 also are running, either on six-person relay teams for the 100 miles or a 50-miler that starts in Marathon.
While the scenic Overseas Highway is full of unique sights, from Betsy the gigantic lobster to the breathtaking Seven Mile Bridge, a running nun is likely to turn heads.
''It's flabbergasting,'' race director Bob Becker said. ``I'm not Catholic and I didn't even know if nuns were allowed to run.''
Legendary ultra-marathoner Lisa Smith-Batchen, who once finished the Sahara Desert's infamous 150-mile Marathon des Sables after being bitten by a scorpion, will be pacing Sister Mary Beth -- who just turned 60.
''But she's so not 60 years old,'' Smith-Batchen said. ``She's like a little kid, with the most amazing energy of anyone I've been around. She's never sick. She can go, go, go. And she so believes in what she does.''
In 1967, Sister Mary Beth, a New Jersey native, joined the Religious Teachers Filippini, a 300-year-old order that helps the poorest children and women in the United States and nine other countries.
In 1995, she began a mission to help children who have become orphans because their parents died of AIDS. Last year she published AIDS Orphans Rising, a book chronicling the growing plight of millions of kids who watched their parents die of the devastating disease and then became heads of households with few resources but a huge responsibility to care for younger siblings.
''In Ethiopia, there are 470,000 new orphans from AIDS last year,'' she said. ``Where do you get the Somalian pirates? From little children with no place to go.''
When the AIDS problem began, most orphans were adopted or placed in orphanages. But now the numbers are too staggering, with estimates of 25 million worldwide by 2010, said Sister Mary Beth, the order's international mission director.
''In Brazil, they take kids for their organs,'' she said. ``In Mexico, children are living in sewers because it's safer for them at night. They're like Ninja turtles; it's so awful.''
Through donations, in which 100 percent goes to help the children, her order has built mission schools in Brazil, Ethiopia, Eritrea, India and Albania to feed, clothe and lodge the youngest orphans.
The mission schools also educate and teach the children skills -- from pizza-making to agriculture to accounting -- to help them provide for themselves.
For $150, a young girl can be set up with a sewing machine, thread and the know-how to start her own business.
''With the micro-enterprise, she doesn't have to turn to prostitution,'' Sister Mary Beth said. ``She has a way to take care of her younger brothers and sisters with dignity.''
She often tells the story of the 6-year-old boy who takes care of three younger sisters in Ethiopia. He was taught how to care for chickens, and became so good he amassed about 300 in his yard.
''We call him the Mr. Tyson Chicken of the area,'' she said. ``Now he comes back to the mission school and gives eggs to the sisters.''
Becker, the race director, said he was inspired by Sister Mary Beth after listening to her speak last year about ''running for a cause'' before a difficult 50-mile trail race in the Grand Teton Mountains in Wyoming. She finished that race in 20 hours, carrying her rosary and holy water.
That finish came on the heels of running nearly 100 miles in temperatures soaring over 125 degrees to pace Smith-Batchen during her 302-mile run from Las Vegas to Badwater, Calif., through Death Valley and up to the summit of Mt. Whitney at 14,505 feet.
''I know at one point it was 127 degrees because a man from NBC interviewed Lisa and he had a huge thermometer,'' Sister Mary Beth said.
She didn't complain about wearing her cotton habit: ''When you're hot, you're hot.'' The race was worth it, raising $550,000 for the orphaned kids.
Sister Mary Beth began running cross-country in high school. She coached the sport at an all-girls Catholic School in New Jersey, where she met Smith-Batchen 28 years ago.
But the nun didn't take up long-distance running until goading by her brothers and father, all marathoners. Her father, Fort Pierce resident Buddy Lloyd, who will turn 89 Wednesday, will serve on her crew.
''It's a big step,'' Smith-Batchen said of Sister Mary Beth's first 100-miler, which is like running nearly four marathons back-to-back. ``She is as nervous as anyone.''
Smith-Batchen, who also will be pacing three other women, joked she will have a fly swatter to keep them on pace to finish in 28 hours.
''I think it will be more like 32,'' Sister Mary Beth said. ``I pray we can do this. I don't know. It's in God's hands.''
To help the time -- and pain -- pass, Sister Mary Beth will listen to Christian songs on her iPod.
''I'm sure there will be hoots and hollers from people wondering who is the crazy person running in the habit,'' Smith-Batchen said. ``But it's really great she is able to do something she loves, and raise money for the kids she loves. She's putting her foot where her mouth is. She's remarkable.''
To learn more about Sister Mary Elizabeth Lloyd or her cause or to make a donation, visitwww.AIDSOrphansRising.org, call her at 916-202-6382 or write: Religious Teachers Filippini Mission Fund, 455 Western Avenue, Morristown, NJ 07960.

The Miami Herald is pleased to provide this opportunity to share information, experiences and observations about what's in the news. Some of the comments may be reprinted elsewhere in the site or in the newspaper. We encourage lively, open debate on the issues of the day, and ask that you refrain from profanity, hate speech, personal comments and remarks that are off point. In order to post comments, you must be a registered user of MiamiHerald.com. Your username will show along with the comments you post. Thank you for taking the time to offer your thoughts.
Comments (33)

Posted by Unknown at 7:52 PM No comments:

Pictures and video of ducklings and baby turkeys

At the ranch where I work, we got baby turkeys and ducklings.  Being from New Jersey originally, my poultry experience is quite limited so I'm taking lots of pics and video of these cuties.

After a weekend of great running and some great snow melt, I seem to be getting a cold.  It needs to go away quickly because I've got a 50 mile race next weekend.

A few fun Only in Idaho pictures below.

There are lots of great questions being asked on the Addison's Support Forum, please check it out and put in your expertise. 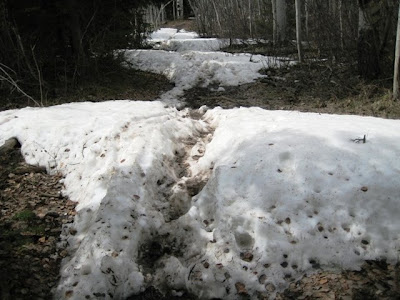 Spring is coming on Aspen Trail 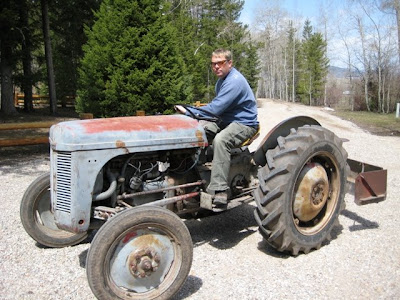 That's one old tractor, only in Idaho! 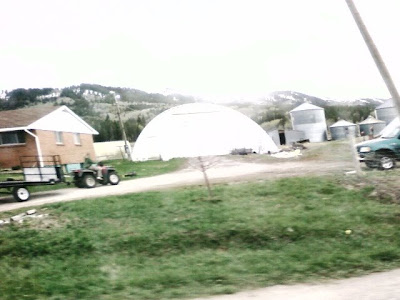 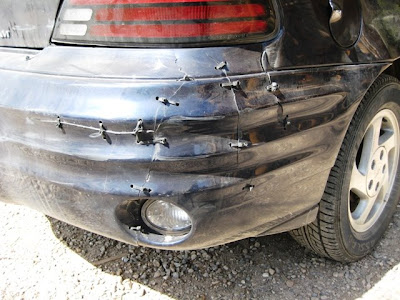 Bumper repair job, only in Idaho 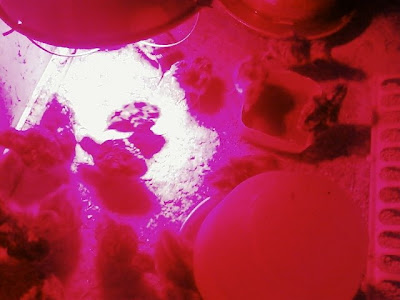 Baby turkeys under a red light to keep them warm.  Not a good picture. 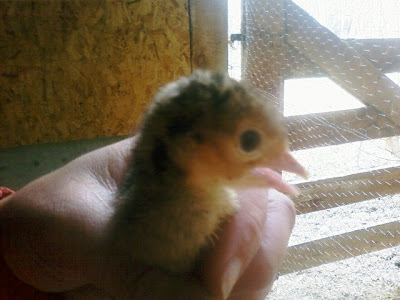 Me man handling the baby turkey

:06 f a baby turkey trying to get away from me 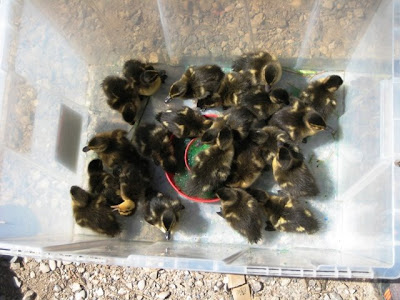 Ducklings right out of the shipping box.  There are about 20 of them. 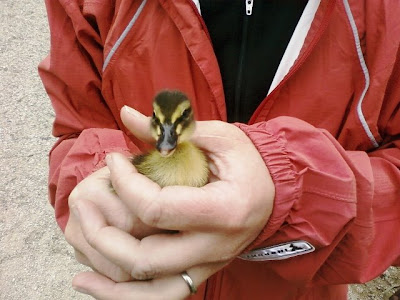 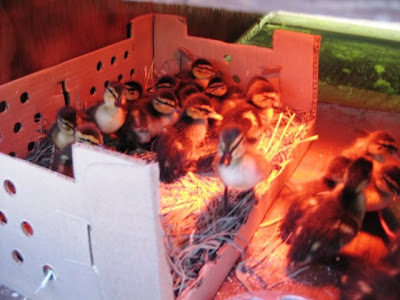 :09 of ducklings in their new home 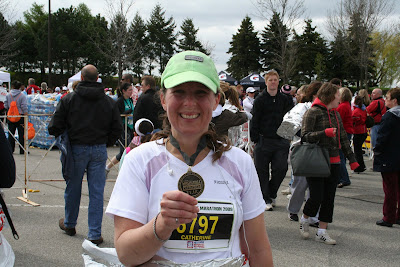 Cath in Canada did a half marathon on Mother's Day!
She's glowing in each and every picture!  Way to go!! 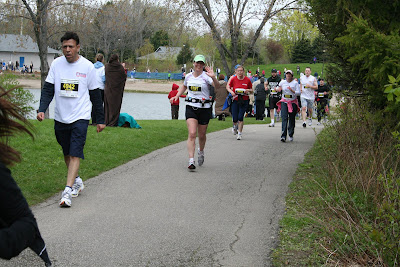 Watch her overtake the guy in the white t-shirt on the left. 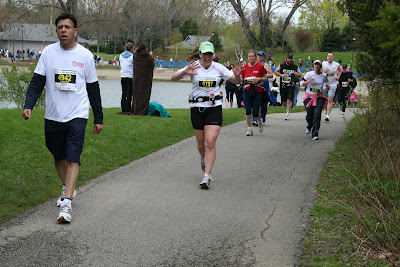 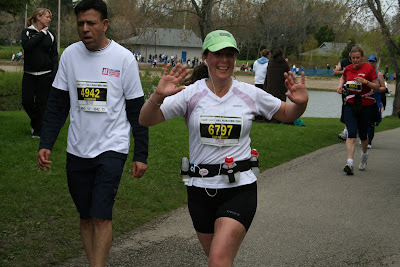 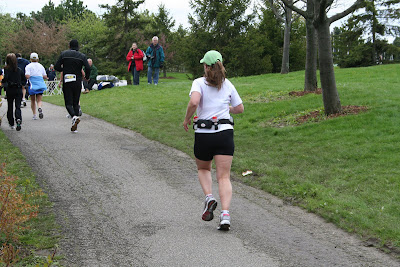 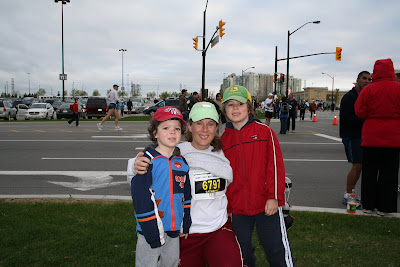 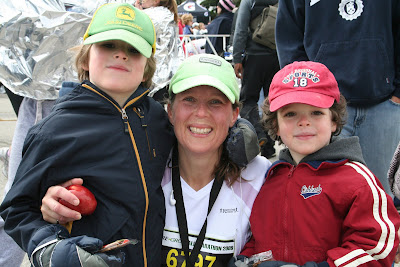 Posted by Unknown at 2:44 PM No comments:

Winter is over, Mud Season has begun 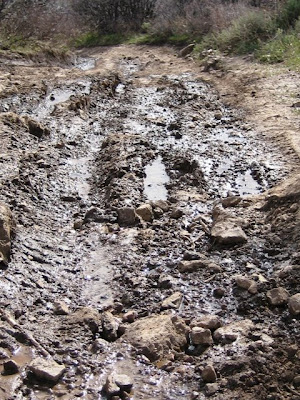 Happy Mother's Day to those of you who are moms!  I hope you all had a great day no matter how you celebrated.

Mud Season is when you go out of the house clean and come home trailing mud everywhere.  You have to stand at the washing machine and strip down or you're forced to remove your clothes in the garage if you're really muddy.

I am hoping that the trails opening up will boost my spirits.  It's nice to be warm when running and I love the sunshine.

Paul and I are running a race in 2 weeks.  It's the Pocatello 50.  It's going to be super challenging (50 miles and 13, 700 of vertical elevation gain) and I hope like hell I can finish.  That kidney infection really put a crimp in the number of miles I've been able to put in.  Muscle memory and positive thinking will play a big role in my performance.

Below are pictures from this weekend. 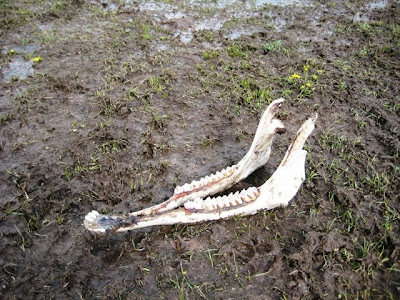 This bottom jaw was HUGE!  Elk or moose jaw? 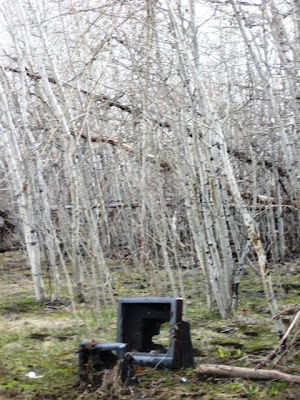 Anyone got a gun?  Target practice! 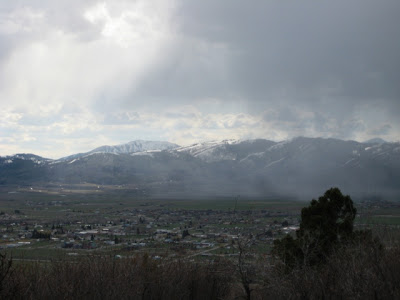 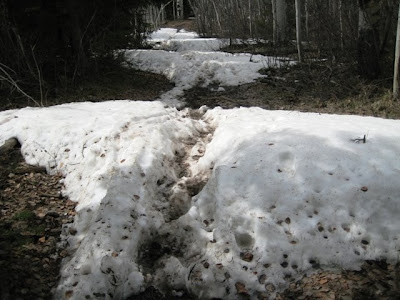 Lots of snow on Aspen Trail 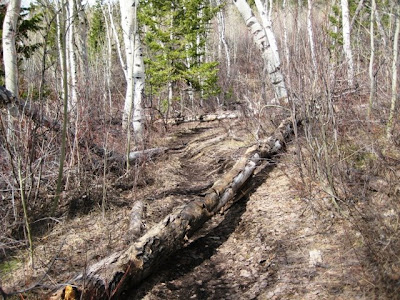 Lots of trees down on Aspen Trail 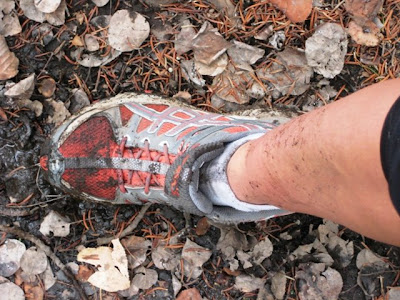 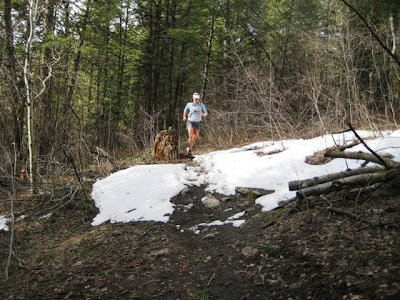