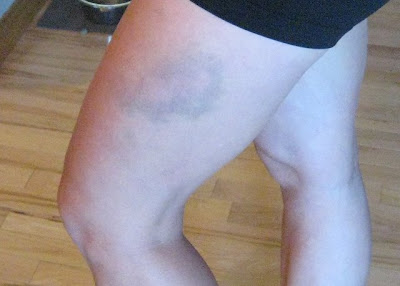 Couldn't get this picture to go below with the bruising caption


Pacing, pacing: I've got 2 things to say about pacing. 1) I'm not going to Leadville :( Julie called me and doesn't even think she'll make it to 50 miles. After the 50 mile mark, pacing is allowed and that's when I'd be needed. 2) In my post about Mountain RATS, I forgot to mention that I learned a thing or two about pacing myself as someone with Addison's. At Mountain RATS we were busy from the moment we woke up until we fell asleep. The more compulsive of us dreamed about our responsibilities all night too! Being that busy was hard on me as an Addisonian. I did not keep up on fluids and got dehydrated (see racing) which caused my gut problems after I returned. I was exhausted when I got back from the dehydration and fast pace. At home, although I am busy all day, I pace myself. I do active things, sit at the computer, do active things, sit and fold laundry or make phone calls, etc... Before this trip, I did not realize how much I paced myself.

Racing: I did a local duathlon (mountain biking and running) yesterday. I should have heeded the "signs" and not done the race but I did the race anyway. The mountain bike was a challenge becase my gears were all messed up and I haven't ridden much in the last couple of years. I had to use my toe to get the chain to go where I wanted it to go, couldn't use some of the gears at all and it skipped in other gears! Despite all of that, I was the first women duathlete to finish the ride. I had a good crash on the bike, picture of bruise above. I thought the run would be easy since I've been running so much lately.
As I started running, my quads and hamstrings began to cramp. I tried to ignore it. I was passed left and right by everyone as I sat on the ground at the top of the climb holding my legs and swearing up a blue streak. The cramps eased up and I finished the race and hopped in the car. I immediately went to the hospital to get my electrolytes tested. Low sodium and dehydration. Go figure. I guess more Florinef and more sodium are in order. In retrospect, I am sure that the gut problems I had last week were due to dehydration.

Bruising: Here's the bruise from my crash on the bike. It's more impressive in person. (see above for the picture). I am inordinately proud of my injuries.
Posted by Unknown at 10:32 AM

I surely can relate to the cramping and the gut problems. Heat is not an Addisonian's friend! I am learning about Endurolux, salt, and popping florinef, also! Good job on finishing!

Congrats on pulling through under tough conditions.

You'll just have to pace me for the Teton races to make up for Julie!!