November 2010 REST
After Antelope Island 100K and State Your Intentions the following weekend, I took the rest of November off.  It was a good chance to think about the past year and the upcoming year.  My mind needed to rest as much as my body did.  2010 was tough, the year began with a stress fracture of the neck of my right femur.  In June, I developed a sinus infection that I ignored.  By August, it did not disappear and developed into bronchitis.  On the positive side, the stress fracture started me on a quest to streak again.  I've done a mile a day (walked, ran and/or crawled) since February 13, 2010!

December 2010 PATHETIC RETURN
I came up with a training plan based on Bryon Powell's MdS running plan.  Bryon's site, iRunFar.com is awesome for ultrarunners and aspiring ultrarunners!  I HAVE TO plan out my runs, exercise and movement or I will find other things to do that don't involve exercise.  I started out slow, mostly walking.  I finally realized that I ran very little last year.  I got into a bad habit from the stress fracture and sickness.  I didn't push myself.  Slowly, slowly, I started pushing myself to run a little bit and a little faster.  Seriously, slowly.  I was running .5 of a mile at 4.5 miles an hour and then walking the rest.  I started doing yoga every Tuesday and The Practice on Sunday a month at Yoga Tejas.  Yoga has been just what I needed mentally and physically.  We are lucky to have such a great yoga studio in Teton Valley, Idaho!

January 2011TRYING HARDER
In January, I finally added some body weight exercises and pull-ups, lots and lots of pull-ups.  I really want to take part in the Teton High School's Cross Fit program but the timing and drive just won't work into my schedule.  Coach Schumacher gave me a fantastic handout with sample workouts.  I'm using that once or twice a week.  I'm increasing speed and duration with my running.  Some of you will laugh at this but I have worked up to running 5.1 to 5.5 mph for about an hour before I have to walk!  Last Sunday I started in on pack training.  I did too much too fast.  My right hip really paid for it.  After some nights with cocktails to dull the pain and fear (of breaking that hip again), I realized I ought to try upping my hydrocortisone.  All better with more HC!  Definitely muscular pain.

February 2011 PEAK TRAINING
This month and next will be full of pack training, speeding up and a few long runs.  I'm also starting plyometrics.  Heat training will start next month, right before I leave for Morocco.  Heat training will be the hardest part of all of the training.  I will have to drive to Jackson, Wyoming six days a week for three weeks to use a sauna.


If you want to see what I've actually done, usually much less than I have planned, CLICK HERE.  I don't tend to do the biking on Wednesday although I should.

I am an idiot 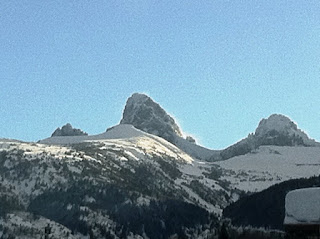 Grand Teton on a cold morning

As much as I'd like to post my MdS training plan, I'm more interested in posting pics from the weekend.  The running is going great despite soreness from starting pack training. 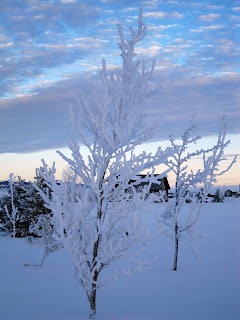 Friday morning, I didn't want to exercise but I did anyway because Joanne said she would skate ski with me.  It was stunningly beautiful.  Very cold.  The picture above is from the same morning.  The skate was nice.  Short, sweet and with Joanne's company.