Did I get your attention?

I'm going to see how many days in a row I can do (walk/run/crawl) one mile a day and three pull ups each day.

Why? Cause I feel like it. My friend Colleen "streaked" last year, inspired me and now I'm ready to commit to my streak.

Do you have a streak that you're going to do, if so, post it in the comments. I want to know what your streak is.
Posted by Unknown at 2:15 PM 7 comments: My new friend Sarah, great on the uphills and finding trail!

I don't believe anymore that life is an out-and-back course. I don't believe that I've circled the cone and am headed to the finish. I don't believe that what hard will be easy in the second half.
I believe now that life is a point-to-point course and that we don't have any idea what the distance is. We don't know how far we'll have to go or what we'll find around the corner. We don't know if the next few miles or years will be flat and fast or rolling. And, for sure, we don't know where the finish line will be.
Runner's World Magazine, December 2008, John Bingham

Diagnosing Addison’s: a guide for GPs

Diagnosing Addison’s: a guide for GPs
THIS LEAFLET OUTLINES THE ROLE OF THE GP IN THE EARLY
DETECTION OF ADRENAL FAILURE.
Posted by Unknown at 7:22 PM 2 comments:

Morning Edition, National Public Radio. Click the link to listen to the audio. Increasingly, patients are sharing and learning from experts and other patients like them through social media Web sites.
text sizeAAA
When Americans go looking for information on health, they turn to the Internet as one of their first sources. According to a recent survey by the Pew Internet and American Life Project, 61 percent of adults say they look online for health information. There's a term for them: e-patients.
Most e-patients go online to read about a health condition. But that seems almost passive compared to the way a small group of Internet-savvy people are connecting to get their health information.
About 20 percent of e-patients go to Internet and social-networking sites where they can talk to medical experts and other patients, says Susannah Fox, with the Pew Internet and American Life Project.
"They are posting their first-person accounts of treatments and side effects from medications," says Fox. "They are recording and posting those podcasts. They're tagging content. They are part of the conversation. And that, I think, is an indicator of where we could be going in terms of the future of participatory medicine."
This reflects the growth of social-networking sites. "The Internet now is not just information," says Fox. "There is a social life of information online. And people are using all these tools to connect with friends and family, to connect with health professionals. And people are accessing a much deeper level of information now than they were five years ago."
Ahead Of The Medical Community
Fox says patients are far ahead of doctors and hospitals when it comes to using the Internet. According to a study in the New England Journal of Medicine last year, only about 17 percent of doctors say they use computerized medical records.
Fox says a growing number of patients are tired of waiting for doctors to share information. "The patients on the vanguard, who understand what's at stake, are saying it's not meaningful if I can't use it," she says.
So they're going to Internet and social-networking sites that allow them to put their own medical data online.
Microsoft last month introduced My Health Info. And Google has Google Health. People use these sites to enter their lab results, or track their blood pressure or cholesterol over time.
The sites say they used advanced encryption, firewalls and other technologies to keep private information secure.
Power From Knowledge Sharing
Jamie Heywood, who created another site called Patients Like Me, says people are used to tracking all kinds of personal information online. So they don't understand why they can't get the records that their own doctors can order up. "What's sad is, you know, they order all this information, and they get it back from the lab, and it comes back in this rich electronic format with all this information on it," he says.
"And in an ideal world, you'd be able to get that raw information just like you can on your credit card for every transaction you do in the world. But you can't in health. It's immoral."
Heywood created Patients Like Me because he was trying to find out about research advances that might help his brother, who later died of Lou Gehrig's disease.
Heywood's site is still small; about 50,000 people have joined. But they come together and share personal information with others who have the same illness, such as multiple sclerosis, fibromyalgia or bipolar disorder.
Heywood says he came to see patients gain power when they share medical information — even the most private of information. By sharing on social-networking sites like his, Heywood says patients can make better choices about their own care.
"The amazing shift is that we've pushed out this concept of sharing," says Heywood. "Which is to say: If you share information about your own experience with this disease, then we can facilitate the conversation that you want to have with the person in the world who is just like you — whether they live in Vancouver, Canada or Australia, or down the block."
You can find another patient who knows what you're going through, says Heywood, someone who "is on the same treatments, is dealing with the same side effects ... whatever variable matters to you at that moment. To find out whether your concerns are justified, they make sense, whether you're doing the right thing — that's the transformation."
The Pew study found that 39 percent of e-patients already use a social-networking site like Facebook. And mobile devices are making it easier. But the source patients say they trust the most remains a traditional one: their own doctor.
Posted by Unknown at 9:51 AM 2 comments: 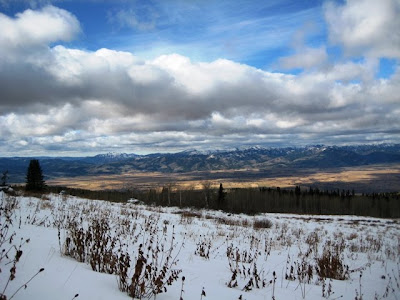 Teton Valley, more specifically Victor, looking east to west. Big Holes are the mountains in the back of the picture.

First off, my apologies to those of you who have emailed me. Most likely I have not emailed you back. I'm sorry! I enjoy the emails I get and they bring a smile to my face. I haven't been able to pull myself together to respond properly!

As far as Addison's goes, I'm feeling well. This disease is interesting, it seems to change over time. I've always been a morning person and that has not changed. Now that I'm getting up early, I'm falling asleep EARLY. Staying up until 8:30 or 9:30 has been a struggle. I used to be able to get less sleep and go to be later. Not so much. My concentration in the morning is good, come evening, forming sentences and coming up with words can be a little bit of an issue. I just have to rearrange my life to accommodate my body.

Below are pictures from one of my care taking jobs and from a couple of runs. 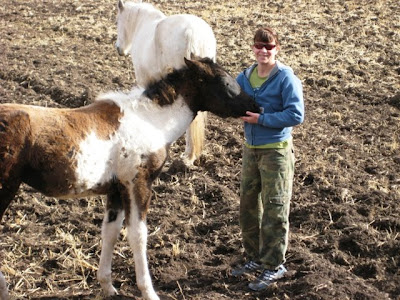 The baby is getting bigger. She's 5 months old. 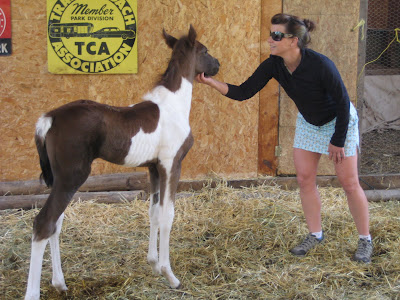 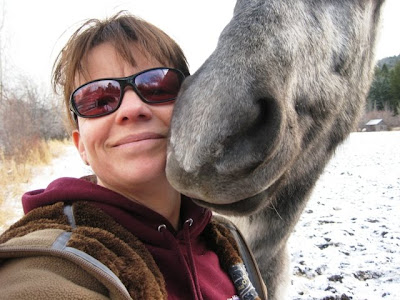 Me and Cisco's nose, he's quite friendly and wants me to pay attention to him, not his baby sister

Runner girls on the Horseshoe Challenge loop, out and about before the wind picked up

Runner girls coming off a really steep section of trail
Posted by Unknown at 9:32 AM No comments: