My clients have some new kittens and I'm fortunate enought to get to check on them for a few days.

Posted by Unknown at 7:42 PM No comments:

Allison Gandey
Authors and Disclosures
July 30, 2009 — Women with a history of migraine had a 26% reduced risk for breast cancer, report researchers. The team is the first to explore the link between headache and breast-cancer risk, and these latest findings confirm their earlier study suggesting an association between the 2 hormonally mediated diseases. Both studies appear in the July issue of Cancer Epidemiology, Biomarkers & Prevention.
"This study is a lot larger than our first," lead investigator Christopher Li, MD, from the Fred Hutchinson Cancer Research Center, in Seattle, Washington, said in an interview. "We looked at more than 4500 cases and another 4500 controls. We had much more statistical power and found that the results were very consistent."
Medscape Neurology reported initial results in November. At that time, Dr. Li's team had looked at 3400 postmenopausal women. In this new study, researchers evaluated more patients, but also included premenopausal women.
"We were happy to see that we could replicate the finding and are encouraged by that," Dr. Li said. The group observed a similar reduced breast-cancer risk in this larger study.
Findings Confirmed
Study participants were from the Women's Contraceptive and Reproductive Experiences Study, a population-based case-control trial. Women were age 35 to 64 years and had been diagnosed with invasive breast cancer.
Researchers attained migraine history from structured in-person interviews and found that women with a history of migraine had a reduced risk for breast cancer (odds ratio, 0.74; 95% CI, 0.66 – 0.82).
This risk did not differ by menopausal status, age at migraine diagnosis, or use of prescription medications. The risk was the same even when researchers restricted the analysis to women who avoided various migraine triggers such as alcohol, exogenous hormones, and smoking.
But the group cautions that it is also possible that medications used to treat or prevent migraine, rather than the occurrence of migraines, may be responsible for the reductions in risk.
Several studies of nonsteroidal anti-inflammatory drugs (NSAIDs) have shown that their use is associated with a reduced risk for breast cancer — especially hormone-receptor–positive tumors, the researchers note.
Dr. Li said that although this may explain part of the link, it is unlikely to be the only factor. A recent meta-analysis of studies of NSAID use and breast-cancer risk observed only a 12% reduction in risk for women who took an NSAID.
The biologic explanation behind the decreased risk is not known, but the researchers suspect that it has to do with fluctuations in levels of circulating hormones.
Fluctuations in Circulating Hormones
At the recent June meeting of the European Neurological Society in Milan, Italy, presenters pointed to an increased possibility of vascular risk factors in patients with migraine.
Presenter Hans-Christoph Diener, MD, from the University of Essen, in Germany encouraged neurologists to also test headache patients for cardiovascular risk factors.
Dr. Diener pointed to evidence suggesting that women who report migraine with aura are at particular risk. "We have to avoid myocardial infarction or stroke in people with migraine with aura," he said.
The discussion moved to hormonal factors when session moderator Jean Schoenen, MD, from the University of Liège, in Belgium, asked for more information about the risk of oral contraceptives in patients with migraine.
"If a patient has migraine with aura, takes the pill, and smokes, this is where I really get worried," Dr. Diener said. He emphasized that all patients should be encouraged to quit smoking.
Dr. Li told Medscape Neurology that his team did not have detailed enough data to assess migraine type but is contacting the women in the study to answer such questions. Investigators are planning a new study assessing the breast-cancer risk of patients with migraine with aura to see if they have a similar risk.
The researchers have disclosed no relevant financial relationships.
Cancer Epidemiol Biomarkers Prev. 2009;18:2030-2034.
Posted by Unknown at 9:26 AM No comments:

Why is summer so short? 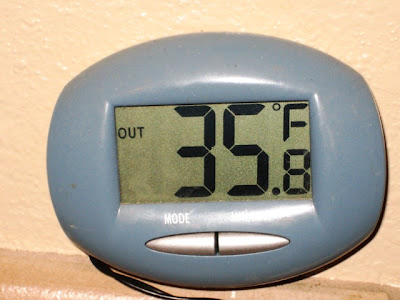 July 29th, this is a summer morning in Idaho

I've been feeling pretty good. I think it's because I'm upping my HC adequately when I run and work. If I don't up my HC enough, I become achy, tired and inappropriately sore in the days following exercise. It's been a busy week, clients coming and going and lots of running. The weather has been ridiculously cold. Nice for running, bad for regular summer stuff. I hate wearing pants, long sleeve shirts and socks during most of the day!

I got 35 miles total of running in on Saturday and Sunday. I was only sore on my shin where I hit a hidden rock really hard.

I've sorted the pictures by subject so you can skip what you don't want to look at. Animals are at the bottom.

Teton Crest Trail Pictures on Facebook.
Click to see too many pictures of the most beautiful trail I've ever been on. 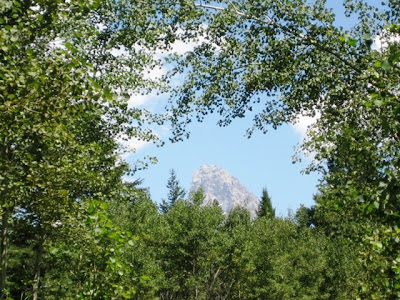 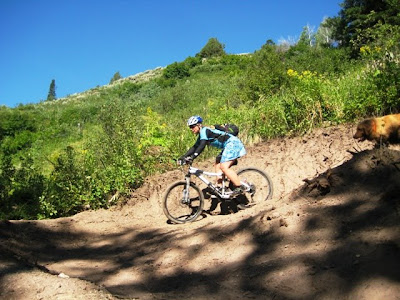 Jo and Targhee on the new switchbacks on Red Creek Trail. Thanks Teton Valley Trails and Pathways!! 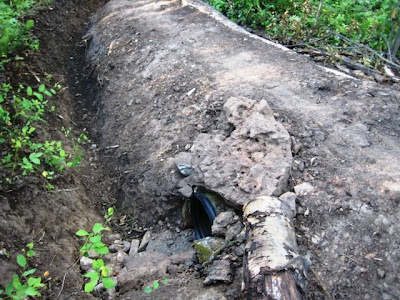 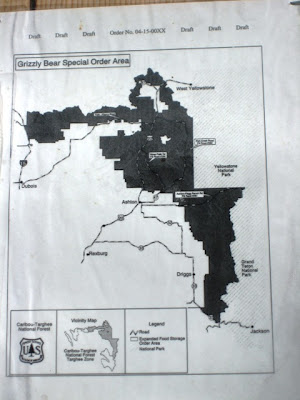 I love running in grizzly country 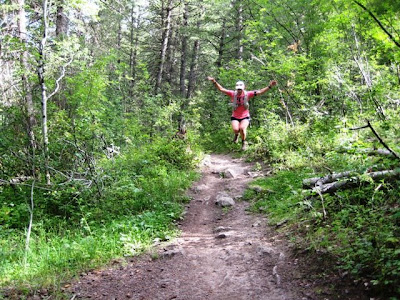 Yep, took this picture of myself. I'm a geek. 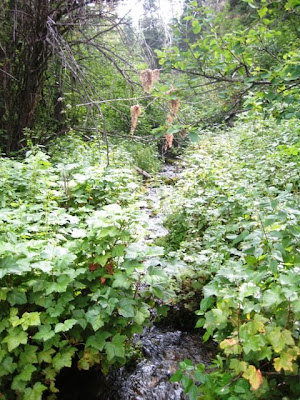 I thought I would take some cute video of me herding cows off the trail, instead I ended up hiding behind a tree because the "cow" turned out to be a bull that didn't want to be herded

Animals at the ranch 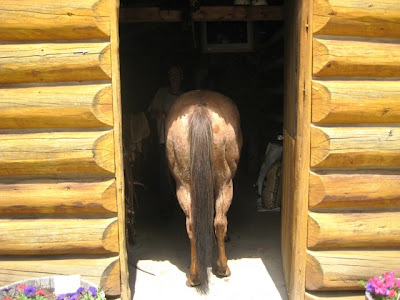 Catch getting his saddle removed 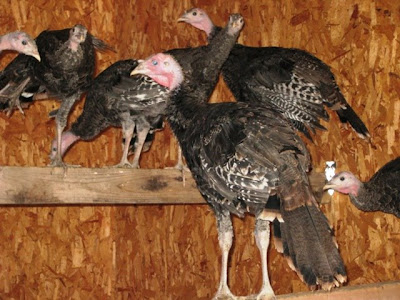 Godzilla on his new roost. Turkeys will probably be released pretty soon. 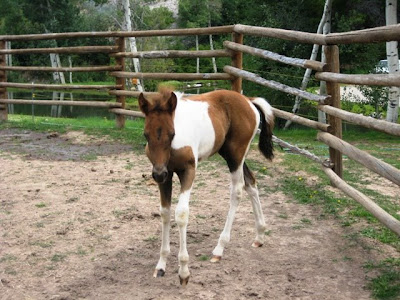 Baby horse is so cute and getting more beautiful every day. 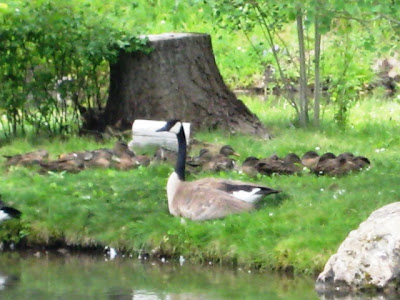 Baby ducks are still a little weird, can't swim gracefully and stay together in a bunch. 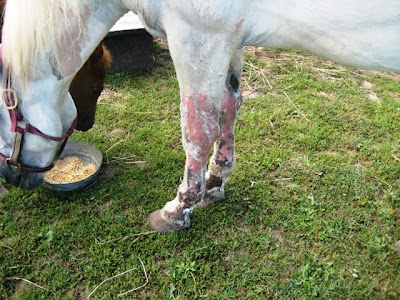 Buffy's legs are getting better by the day. She is so much happier now.

I get so tired of hearing people say that they "can't". There are so many things we CAN do. If we can't, it means we're not trying hard enough or we're not asking for enough help. Make sure you ask your doctor if it's ok for your to make any changes to your daily routine.

You can have good health, you have to start somewhere. Start with the above suggestions after you talk to your doctor. Please!
Posted by Unknown at 9:19 PM 4 comments: