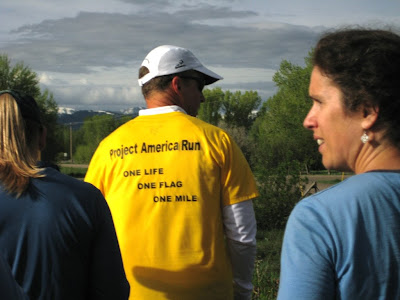 Mike wearing the shirt that says it all 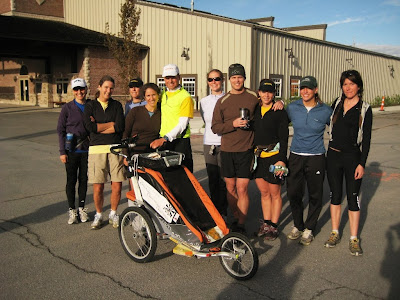 7:30 am, just some of the people who joined Mike today
I had the privilege today to run with a friend, Mike Ehredt, who is running from Oregon to Maine and placing a flag of a fallen soldier every mile along the way. His journey will take 6 months and he will place over 4,300 flags. Every flag has the name, age, hometown and rank of the soldier. Each time a flag is placed, the information is read, the flag is photographed and marked with a GPS, and Mike salutes the flag.
It was sad and sobering to read the name of the person and know that he was dead and did so in service to our country. What Mike is doing is a wonderful, powerful remembrance of people who have died in the Iraq war.
Mike's consistently running 30 miles a day. If he comes through your neighborhood, please go out and run with him, wave to him, honk at him. If you are lucky enough to see the flags, think of those who have given their lives for war.
For more information:
To track Mike's progress
Blog
Website
Facebook 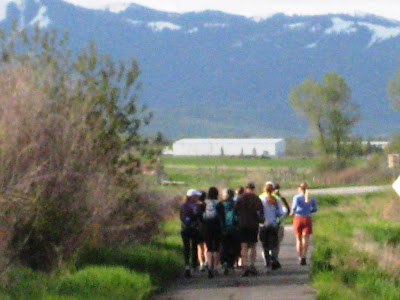 We get a beautiful morning to join Mike
I'm having a hard time putting captions on the pages. Mike taking a picture of a flag being placed, Anna placing a flag, me looking like an idiot, Meara after placing the flag. 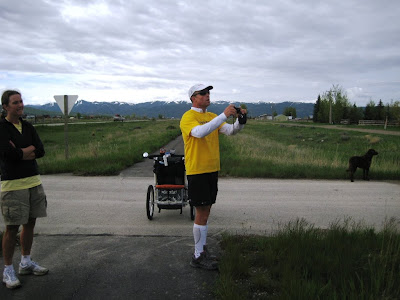 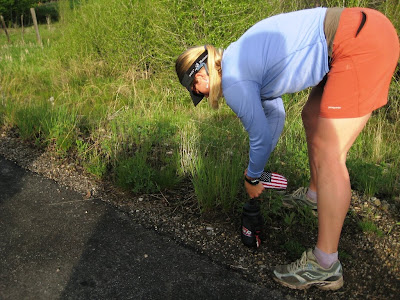 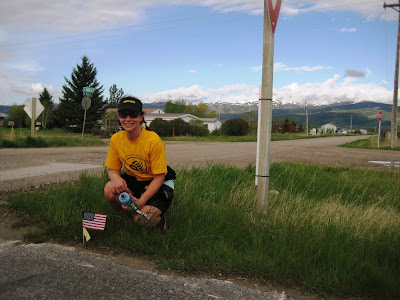 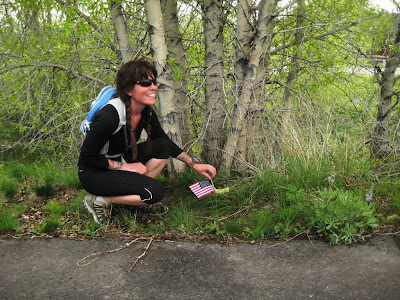 Posted by Unknown at 6:26 PM No comments: 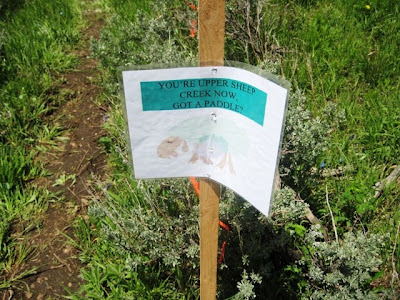 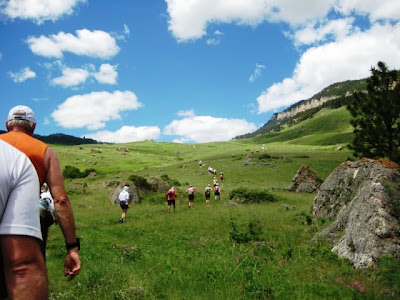 Gorgeous scenery. My friend Carl is in the orange shirt on the left. He always kicks my ass.

On June 18th, I will start do the Bighorn 100. It is a 100 mile foot race. It goes out 50 miles and back 50 miles on trail. There's a 34 hour cut off. It's beautiful. Most of the first 50 miles is uphill and the second 50 is downhill. I attempted this race in 2009 and ended up pulling out at the half way point hypothermic, with low O2 sat and some kind of gastroparisis. 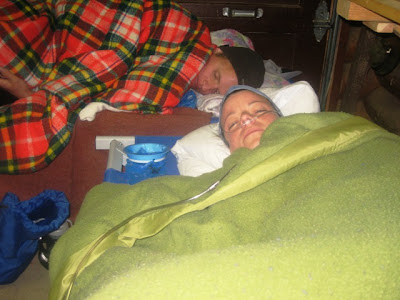 This is what a DNF (did not finish) looks like. Barf bag and oxygen!

In the 2 hundreds I've started and not completed and the one that I did complete, I learned the following:
I started out 2010 with a stress fracture of the neck of the femur and highly under replaced with my hydrocortisone for a couple of months. I started a walking streak on February 13th, 2010 and I'm currently at day 116 of my one mile a day or more streak. I quickly progressed to 50 to 60 miles a week of walking/running and discovered that I really like walking. As a result, I haven't run as much as I have in the past and have walked more. I am thinking that this might be more realistic training for someone like me! Lots of slow time on the feet might get me further than running and then walking. Who knows? I'm feeling fresh and hopeful.

I've got a concern about my day 10 migraine which is due to hit race morning. I don't know what to do. None of the changes I've made over the last 30 years of migraines have made one bit of difference in stopping them. What do I do if I get a migraine race morning? I really do not know.

I'm trying something new and exciting! Compounded HC troches. They are peppermint flavored "gummie squares" with 10 mg of HC in them that I will put under my tongue. Some of my gut trouble during races is exacerbated by not being able to digest the HC orally when my stomach seizes up which inevitably happens at some point during a 30 hour effort. Putting the HC under the tongue makes the HC go directly into the blood stream, bypassing the digestive system. I'll give a report on that after the race.

I'm avoiding getting all of my stuff together for the race. I don't know why. I will try to do some of it today. It's hard to get motivated to do much of anything when it's in the high 40s and raining. I think I'd rather get in bed and read! 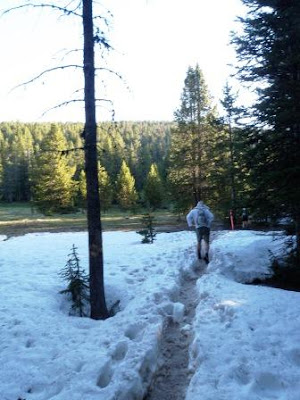 The conditions last year where snowy and muddy. Because of the late snowfall, they will probably be much worse in 2010. I will be doing this section twice in the dark. 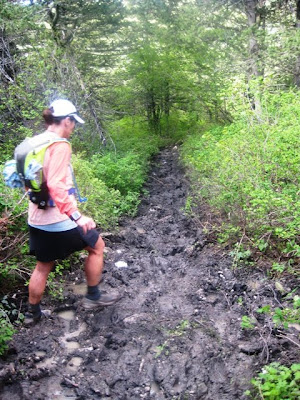 Marie slogs through the mud. Eventually the mud sucked her shoe off. Note to self, bring a change of socks in my pack. I will do this section once during day light and once at night.
Posted by Unknown at 4:11 PM 3 comments: 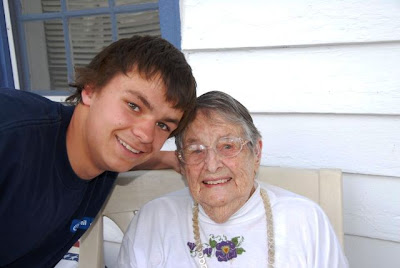 I'm not sure I have much to say in this post. The race is in eleven days. I have my doubts about my ability to complete the race and I have lots of anxiety. Luckily, I'm starting my taper and have time to get as prepared as I can. I'm on day 114 of my streak of walking at least one mile a day.

The picture above is my son and my Grandma. Zane was able to visit Virginia for the family reunion. He's got some generous relatives who made it happen for him. Thanks Aunt Nicci and Aunt Lori! 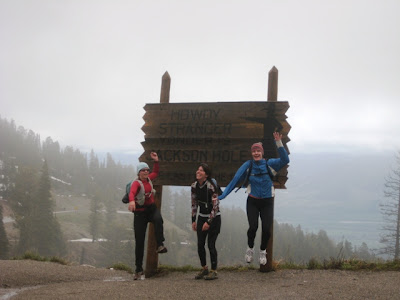 Meara, mystery friend and I brave the elements on Teton Pass 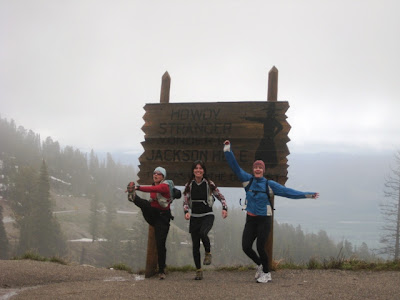 Meara, Mystery Friend and I brave the elements on Teton Pass 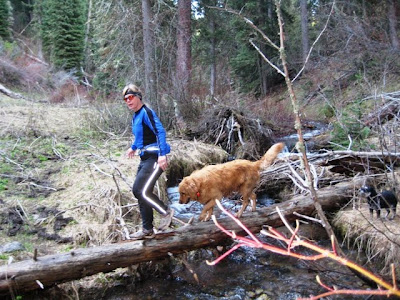 Joanne and Bridger cross a creek in Pole Canyon 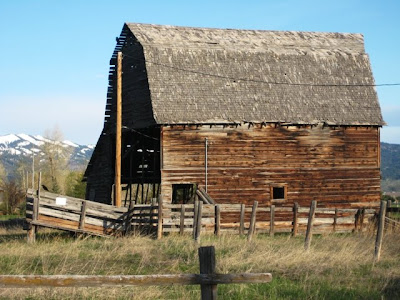 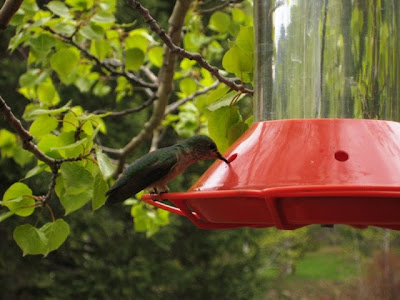 Humming birds are back! 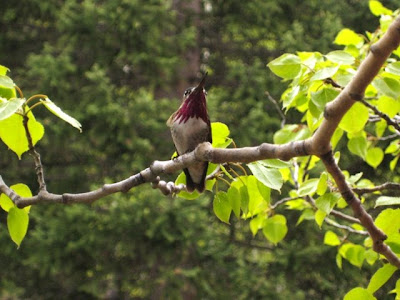 A ruby throat posing for me 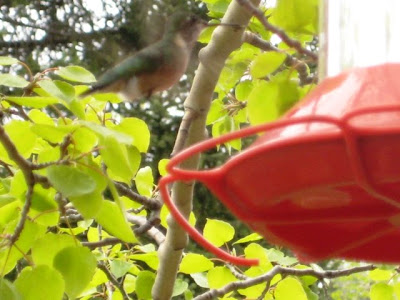 An attempt at taking a hummer pic. One of one hundred!
Posted by Unknown at 1:47 PM 3 comments: