An email and press release from amazing Addison's woman Heather!

You may learn more about the event, and click on a link to add your comments, at http://www.vasculitisfoundation.org/vfpowerpedal.  If you wish, you may also make a donation to the Vasculitis Foundation, the group that is sponsoring the ride, but that is not required!  Your words are far more important than your dollars.

FOR IMMEDIATE RELEASE
May 18, 2009
Contact: Joyce A. Kullman, Executive Director of the Vasculitis Foundation
Phone/Fax: 816-436-8211
Email: jakullman@vasculitisfoundation.org
CYCLISTS TO RIDE FROM PITTSBURGH, PA TO WASHINGTON, DC TO CALL ATTENTION TO VASCULITIS AND OTHER RARE DISEASES
Riders to deliver letter signed by hundreds to U. S. Congress
“By taking part in this initiative, I am hoping to bring attention to the Vasculitis Foundation,” says Ms. Kullman. “Our organization serves thousands of patients who have one of the 15 vasculitic diseases.  However, it’s equally important to have legislators understand that the rare disease community is a huge demographic.”
“We’re the messengers,” says Kullman. “However, we’re asking rare disease patients to be ‘the voice’.  We will put many of these comments into a letter that will be hand-delivered to the US Capitol. This bike trip is all about the power of the individual connecting with the powerful lawmakers in Washington DC.”
(a)    National Urea Cycle Disorders Foundation
(b)   Platelet Disorder Support Association
(c)    National Adrenal Diseases Foundation
(d)   National Institute of Health  Office of Rare Diseases Research
(e)    Polyarteritis Nodosa Research and Support Network
(f)    Aplastic Anemia & MDS International Foundation
(g)    CARES Foundation, Inc.
(h)   Children's Liver Association for Support Services
(i)     Vasculitis Foundation
(j)     National Organization for Rare Disorders
Posted by Unknown at 10:56 AM 2 comments:

Why it might be a good idea to do your own medical research...

I'm still reading Deep Survival, Who Lives, Who Dies and Why by Laurence Gonzales and came across the passage below.  It made me think we might be our own best researcher and advocate because doctors are supposed to be experts and we know so little.

We like to think that education and experience make us more competent, more capable.  But it seems that the opposite is sometimes true..."In the beginner's mind there are many possibilities," and Zen master Shunryu Suzuki.   "In the expert's mind there are few."

Don't hesitate to follow your instincts with regard to your health.  Research all possibilities no matter how obscure.  You deserve to feel well and you can be the driving factor in your treatment and wellness.
Posted by Unknown at 11:18 AM 3 comments: 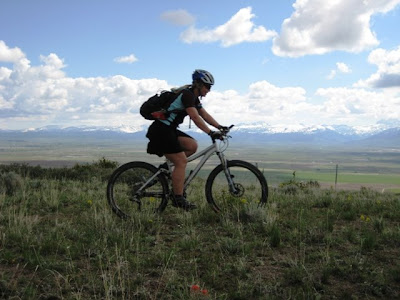 Human chick, Joanne.  Video of her below.
Big Holes, Idaho

Recovery from this weekend is going well although I might have tapered my hydrocortisone a little too fast.  It's easy to fix that, I'll just take a little more HC right now since I'm thinking about it.  Soreness is nearly gone and bike riding didn't hurt a bit.  It's finally mountain bike season in Idaho!  With as much as I've been running lately, it's hard to believe that mountain biking is my first love.  I'm going to do much more of both this summer.

Results are in from the race and I came in very near the end.  However, I have to say that was my most challenging race that I've ever done and the thought of it brings a big smile to my face.  I finished.  Some didn't, some went really fast.  Finishing a race like that lets me know that I can accomplish much, much more!  Watch out world! 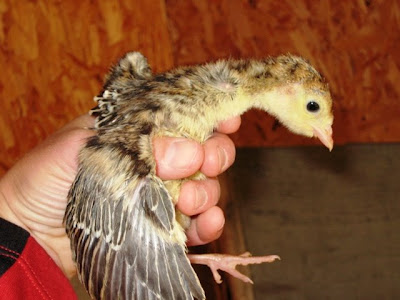 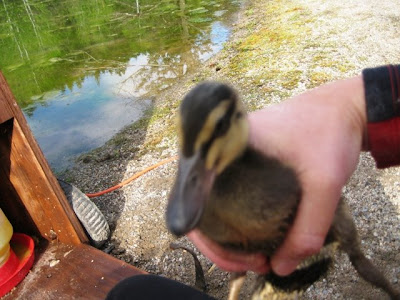 Duckies are getting HUGE (picture is blurry, hard to hold chick and take pic with left hand)

Turkey chicks pecking at my ring and hand.  I'd better be careful because it's going to hurt pretty soon

Human chick!
Posted by Unknown at 6:03 PM No comments:

For the second time, I'm reading Deep Survival, Who Lives, Who Dies and Why by Laurence Gonzales.  As I read the paragraph below on pages 86 - 87 of the paperback edition, I felt somehow justified about my bad Emergency Room behavior.

Psychologists who study survival say that people who are rule followers don't do as well as those who are of independent mind and spirit.  When a patient is told that he has six months to live, he has two choices:  to accept the news and die, or to rebel and live.  People who survive cancer in the face of such a diagnosis are notorious.  The medical staff observes that they are "bad patients," unruly, troublesome.  They don't follow directions.  They question everything.  They're annoying.  They're survivors.  The Tao Te Ching says:

The rigid person is a disciple of death;

The soft, supple, and delicate are lovers of life.

Please strive to be an annoying, unruly and troublesome patient.  Question everything.
Be a survivor.
Posted by Unknown at 9:19 PM 7 comments: 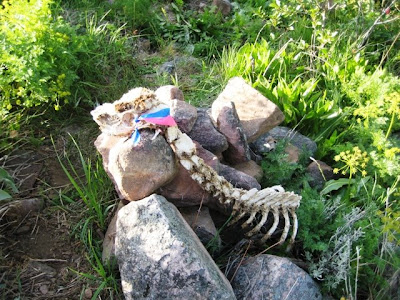 A big thank you to everyone who thought good thoughts for me yesterday!  I appreciate it!

Good news, I finished the Pocatello 50 without crying.  I accomplished two goals that I set out to accomplish.  The Pocatello 50 mile race course was actually 51.8 miles and 13,700 feet of vertical elevation gain and I got a few extra tenths at about mile 39 because we thought we were lost and back tracked.  The race was run very, very well.  The course was very hard and beautiful.

As far as Addison's goes, I gave the race director my usual letter about Addison's and my emergency injection kit.  Well the race director did an awesome job making me comfortable being on this rural, difficult course.  All of the aid station people knew about me and when I checked in, one of the aid station people would come over, put a hand on my shoulder, look me in the eye and ask me how I was doing.  At the end of the race, both race directors came up to me and shook my hand.  It was so nice to know that anyone who was working on the race would know to give me a shot if I got hurt or became unresponsive for any reason. 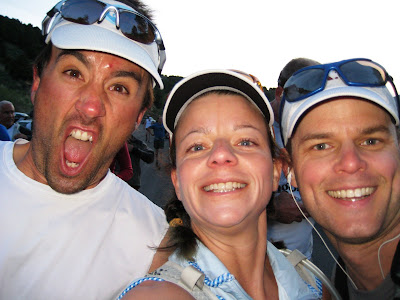 Mike E, me and Paul moments before the start 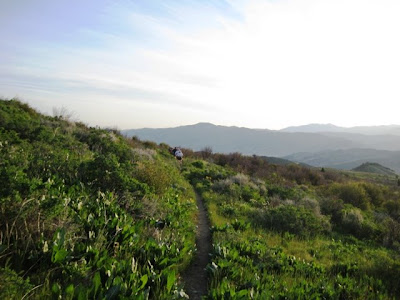 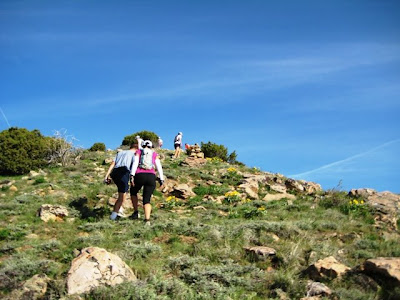 Incredibly steep and there was NO trail.  It took about 45 minutes to go one mile

Damn, I'm so graceful.  Watch this, it's funny 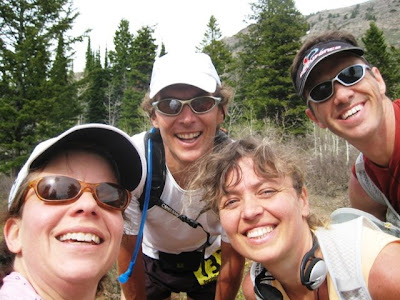 Thinking we're off trail at about mile 39, we're all in great spirits!  Me, Jeff, Olga and Larry