Aspen Trail and me 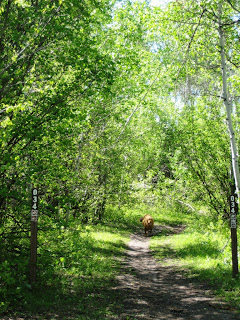 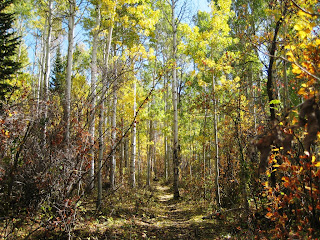 I've lived here in Teton Valley, Idaho for 16 years.  In those 16 years, so much has changed in the Valley, in my life and in the world.  One thing that has mostly remained the same is Aspen Trail.  Because we are moving from here soon, every trail I've been on this summer, I think, "This could be the last time I'm here!"  Usually this thought fills me with a little spark of happiness.  Yesterday on Aspen Trail, I cried a little bit.

This post is a departure from my usual posts.  Probably lots of rambling words.


I took cute, chubby Zane up there in a backpack when he was 2 and a half.  I remember struggling with his weight on the hills and struggling with the (very justified) fear of bears.  We turned around after less than a mile. Now that chubby two year old is seventeen and could probably carry me right up the hill with no trouble if he wanted to.


While on Aspen Trail, I've run, biked, snow shoed, hiked mostly alone but sometimes with friends, my son, a Terry executive who laughed at me for wearing a skirt!, husbands, a potential boyfriend who turned into husband.  I done it with Allison over a decade, trudged through waist deep snow and rolled on our bellies with Meara.

My fitness and health have changed so much over the years.  There have been times that going up every hill was a challenge.  Sometimes, lately, every hill is bliss. There were times I kicked guys asses going downhill on a mountain bike.  There were times that I wished I could run the whole thing from start to finish.  I  progressed to easily running it from start to finish and then went about my day like it was no big deal, at points, it was a HUGE deal.  Once, I ran it in Croc's because of a pain in my foot that turned out to be a broken hip.


I've seen the seasons change from summer to fall to winter to spring.  I've laughed and cried and sometimes not thought about much at all while on the trail.  I can run it as fast as I can ride it.  I admire the change of seasons.  I've seen bear tracks, cat tracks, wolf tracks and a wolf bed, moose, deer, grouse, hawks and an ultralight flying overhead.  Aspen Trail was my first and only night run that wasn't in a race.  There was a light coating of snow, it was silent and peaceful and not too cold.


Aspen Trail is beautiful.  I will miss it.

The changes that are coming up are good.  They are scary.  They are exciting.  You can be sure when I come back to Teton Valley, I will visit Aspen Trail and love it as much as I did the first time I was on it.

What a beautiful place to be. It looks so peaceful.

So beautiful, I can see why you'll miss it! :) my fav is the leaf carpet.

Amazing pics! Good luck on your race next weekend!