Dick passed away a couple of weeks ago.  He was a good, kind man.  Because of him, I was diagnosed with Addison's and given my life back.  Dick was even more fun in person than he was online.  Dick had 30+ years of experience with Addison's, knew the science of it and generously explained it to the rest of us.  From 2004... 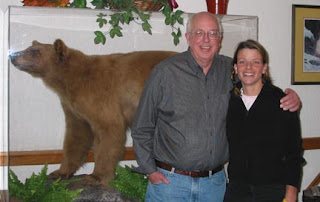 ADVERTISEMENT
Richard Norman Loeppky passed away on Saturday, April 21, 2012. He was cherished by his family and friends and appreciated by his colleagues and students.

Loeppky
Richard was born in Lewiston, Idaho, on Aug. 2, 1937, to Norman and Helen Loeppky. He received his Bachelor of Science in chemistry from the University of Idaho and his Ph.D. in organic chemistry from the University of Michigan. After finishing his post-graduate work at the University of Illinois, he spent his entire academic career as a researcher and organic chemistry instructor at the University of Missouri.
A very generous man, he dedicated most of his life to cancer research. His work led to several discoveries that identified cancer-causing chemicals in retail products.
For his excellence in cancer research he received international recognition, the Founders Award for Outstanding Scientific Achievement from the American Chemical Society and was inducted into the University of Idaho's Alumni Hall of Fame and College of Science Academy of Distinguished Alumni. Recently, he worked with the European Union on the construction and revision of regulations related to cancer-causing chemicals.
He also had a passion for teaching the next generation of scientists and received the Purple Chalk Teaching Award, which acknowledges teaching excellence of select faculty members, from the College of Arts and Science Student Council. This was the award of which he was most proud.
He loved to travel the world, meet new people and take photographs of his surroundings. He had a very inquiring mind and was a gifted individual in so many ways.
Richard is survived by his daughter, Ann Loeppky-Finn (Robert); son, Greg Loeppky (Nicole); granddaughters, Keira Finn and Emma Loeppky; sister, Marilyn French (Carter); niece, Katie (Joel) Yates; and nephew, Ryan French.
He was truly loved and will be deeply missed. A memorial service will be held at 1 p.m. Saturday, May 5, at Central Lutheran Church in Everett, Wash. In lieu of flowers, please donate to the charity of your choice.
This article was published on page A11 of the Sunday, April 29, 2012 edition of The Columbia Daily Tribune.Click here to Subscribe.
Posted by Unknown at 5:20 PM